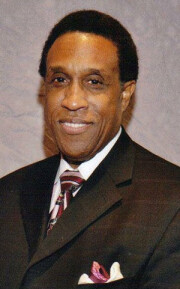 Dr. James A. Hogan, Sr. was baptized at the Salem Baptist Church in Atlanta, Georgia. The church has been renamed and is now pastored by Rev. Jasper Williams. While still a teenager, Dr. Hogan accepted the call to the ministry and was ordained at eighteen years of age. In 2012, he celebrated fifty (50) years in the ministry. Dr. Hogan is a recipient of The Interdenominational Theological Center’s (ITC) Gardner C. Taylor Preaching Award.

Before his academic studies in religion and theology, Dr. Hogan earned a Bachelor of Science in Physics followed by a Master of Arts in Philosophy. He has matriculated at various colleges and universities and holds a Doctor of Ministry and a Doctor of Philosophy in Christian Education.

Dr. Hogan has served as board member of several non-profit organizations. For twelve years, he served as President of the Congress of Christian Education for the Tenth District of the General Missionary Baptist Convention of Georgia. He has also served as guest speaker or lecturer for several academic institutions.

Dr. Hogan loves to teach and interact with people. He spends much of his time reading and has a library of over fifty thousand books and journals. Additionally, he has a great interest in photography and computers. When it comes to entertainment, he favors movies from the 1930’s.

Dr. Hogan has served as the pastor of New Zion Hill Missionary Baptist Church in Augusta Georgia since 1987. He can be heard reviewing the Sunday School Lesson on local Augusta radio stations WFAM-every Saturday at 5:15 p.m. and WTHB every Sunday at 8:30 a.m. The radio broadcasts of the worship services can be heard each Sunday on WFAM at 7:45 a.m. and WTHB radio at 10:30 a.m. The church worship services can be viewed on Comcast Channel 4 every Sunday morning at 7:00 a.m. and 10:00 a.m.

Dr. Hogan is married to First Lady Carrie B. Hogan. They have two sons and two daughters, as well as four grandsons and three granddaughters.